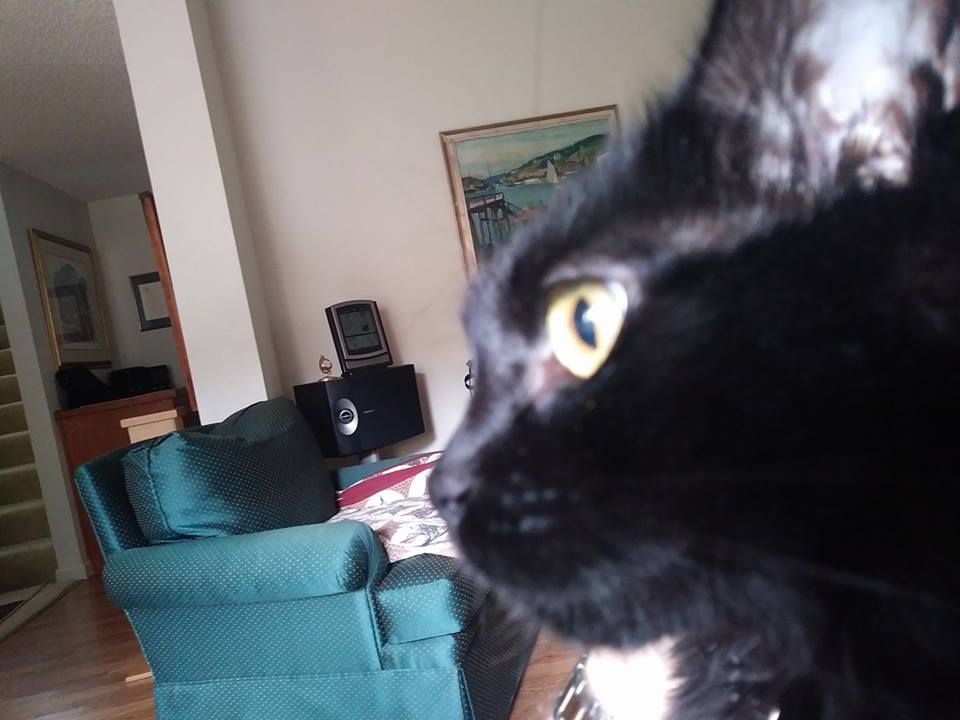 Lynn Merritt: Definitely not Norwegian. Nose bridge needs to be straight. I’m expert in NFC, not any others

Karen Knapp: Not Maine coon…she would have a more “grizzly” face. But I’m no expert!

Lynn Merritt: The other characteristic is the triangular face of a 100% NFC

Annette West: You cannot tell from a photo especially one like this. I agree, not NFC nose. Long hair, mane, tufted paws? Does not look Maine Coon from this photo as none of those are present.

Cathie Bogue Lawrence: She is long haired she has tuft feet

Annette West: This is a good reference for MC. http://mainecoon.org/how-to-tell-if-a-cat-is-a-maine-coon/

How to Tell if a Cat is a Maine Coon – MaineCoon.org
mainecoon.org

Cathie Bogue Lawrence: This is she Roo Ella

Cathie Bogue Lawrence: So she either Maine coin or siberian

Cathie Bogue Lawrence: Sorta wished she was Siberian allergies esp with my daughter when she visits sneezing

Annette West: Cathie Bogue Lawrence ,not necessarily, she could be anything. No way to tell without DNA. She could just be a beautiful domestic long hair. 🙂

Christine Gaughan Nesheim: Do you think this is a MC mix?

Annette West: Check the info posted to see if there are any matches. What a gorgeous kitty!

Christine Gaughan Nesheim: Thank you, I have checked around a lot and I even posted this, however I still can not place him. The vet says part Main Coon, everyone who meets our giant says MC mix, but I look at his profile and see Siberian mix.

Ginger Rogue: A MC mix maybe. Nose has the dip/L shape. But hard to tell without seeing if she has any of the other features.

Annette West: This is a good reference also.

Brittney Anne: He is a mix. But has the straight nose, triangle face, fuzzy toes, and almond shaped eyes.

Brittney Anne: Thank you. He really does that such a sweet gentle face.

Brittney Anne: He sure loves his cuddles too.

Christine Gaughan Nesheim: I have the same question about my cat.

Christine Gaughan Nesheim: What’s this cat. I thought a MC mix and so did the vet.

Loes Rammers: the nose of my Norwegian…

Jessica Lynn Palmer: My hubby swears our Garrus is NFC…. I feel he’s my baby, I don’t care what he is. All I know finding a vet that can care for big boys like him are hard.

Lynn Merritt: My vet called my NFC too fat. He might have been 18 lbs. this is a very large breed. Sometimes I wonder if some vets know about the NFC

Jessica Lynn Palmer: Exactly she put him on a more exreme diet than we had him on. He was a constant 22lbs, what she suggested dropped him from 22 to 18 in a month. I had a heart attack.Not to mention he had a UTI and she kept using a needle and poking for his bladder too many times for my liking to get a sample….See more

Christine Gaughan Nesheim: Ours was 16 lbs ( part MC we think) he has been sick and has now dropped 3 lbs ( also lighter in the summer) now he is boney.

Jessica Lynn Palmer: So cute! I am sorry about the weight issues, could it be thyroid related?

Christine Gaughan Nesheim: The doctor thinks it is stress related four new cats have moved in behind us and our cat thought it was his territory. Now those four cats are all over the place.

Cindy Butler Mancini: Definitely not Norwegian — too much of a dip from forehead to nose. They are virtually flat there.