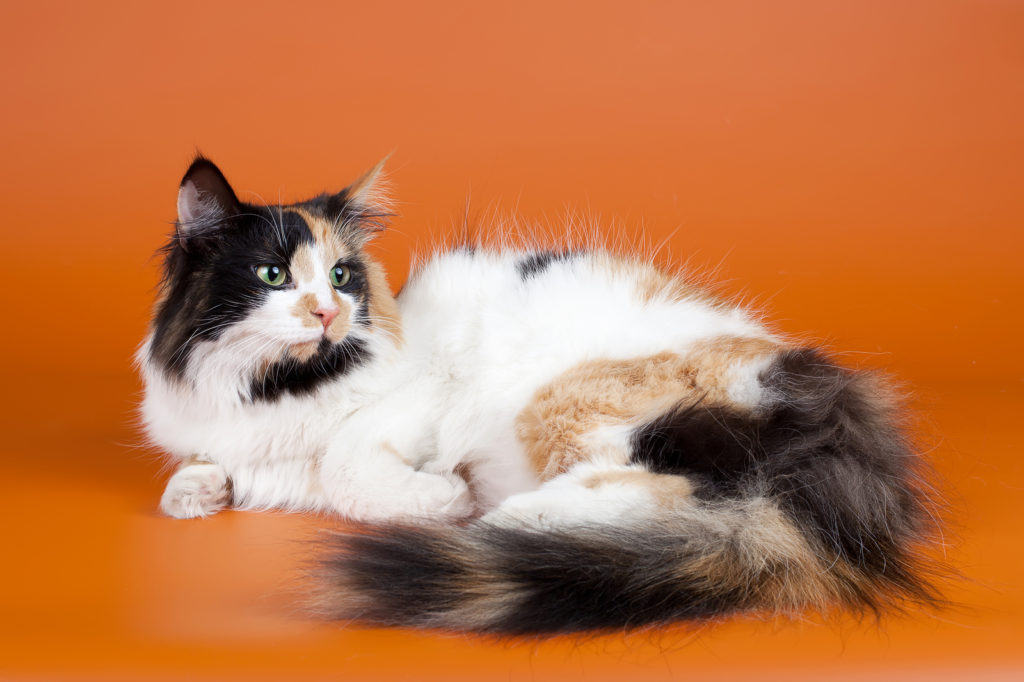 Can you tell the difference between a purebred Norwegian Forest Cat and a mix? There are several tell-tale features and trademarks that you can look for.

The most common clues are weight, color, ears, and fur density. Norwegian Forest Cats (or “Wegies”) are known for being large, sturdy felines with thick, fluffy coats and bright green eyes. A “triangle” shaped head and big almond shaped eyes are two other giveaways that can help identify your cat as a Wegie mix.

While a purebred Norwegian Forest Cat will obviously have all of these traits, a Wegie mix will have many or even just a handful of traits.

As mentioned before, Norwegian Forest Cats can get pretty big (although they certainly aren’t a serious contender for largest domestic cat breed). Some examples of the breed can tip the scales at 20 lbs or more, but this is more of an exception than the rule. By and large, Wegie cats will clock in at around 12-15 lbs for males, and 8-13 lbs for females.

Wegies can resemble Maine Coon cats and the two are commonly confused with each other, but there are ways to tell them apart. Maine Coons tend to be much larger and have more of a “wedge” shaped face.

A Norwegian Forest Cat also matures slowly, meaning it may take a while longer than other breeds to reach the full height and weight of adulthood.

Understand that Norwegian Forest Cats can come in just about any color or pattern, with the exception of the color points that you would typically find in Siamese or Himalayan cats. Pay close attention to the fur of your kitty. The fur won’t be as long as something like a Persian, but it will be very dense and water-repellant.

A Wegie will also commonly have a full ruff around its neck and fluffier “britches” on its legs. Large feet featuring tufts of fur between its toes is another very common trait for both purebred and mixed Wegies. Big, bushy tails and Lynx-like tips on the ears is something else to look for.

Is Your Cat Part Wegie?

If your kitty has any of these features, there’s a chance he or she is part Norwegian Forest Cat!

The only way to know for certain would be to take your cat to a reputable Norwegian Forest Cat breeder and have them perform a hands-on assessment. But maybe it’s more fun keeping it a mystery anyway!